Running several steps of a Travis CI build in parallel

Let's not deny that GitHub actions are hitting hard in the tech community, and many projects are transitioning from other continuous integration systems like Circle CI or Travis CI.

Personally I have been using Travis a lot during the past years, for all my OSS projects, and I have gotten very used to it.

However, people seem to be "abandoning" travis in favor of GitHub Actions, for different reasons. "It's faster", "I can run smaller tasks in parallel", etc.

In my case, I have moved a few very specific tasks there, where travis was becoming a bottleneck, but I still have mixed feelings about the very-verbose yaml-based config needed to configure a few GitHub Actions, compared to the more concise travis one.

In this article I'll explain how I improved a travis build to run several smaller tasks in parallel jobs, without having to completely move away from it.

This project's travis config is relatively simple. It is used to build a JS project for the web browser, and it has to run the next tasks:

Problems with this approach

This is more or less ok, but the last two commands in script can be relatively slow and can delay the whole process.

Also, specially the mutation tests one, which is currently always considered successful regardless the result, can make the build reach the maximum run time allowed by travis, making the whole build falsely fail.

The reason for the before_script step is to determine which source code files changed, and run mutation tests on them only, in order to mitigate this.

Other than this, the build config defines "global" customizations that are actually only used for some tasks:

Making use of jobs

One cool feature travis supports is the use of a job build matrix, that lets you define multiple jobs that run in parallel as part of the same build, and make each one of them do unrelated tasks.

Using this feature it is possible to improve the .travis.yml file, making it look like this:

This approach introduces all these benefits: 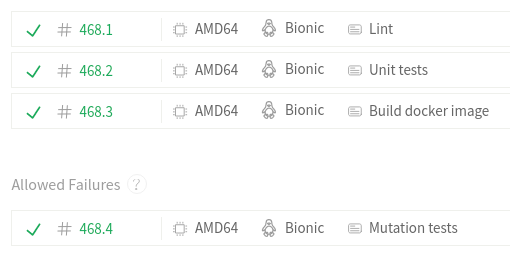 The main purpose of this article was to showcase that travis still has a lot to give. Github Actions are definitely cool, but there's usually no silver bullet for everything, and a combination with other tools might be more suitable.

Also, this allows people using travis to improve their builds without having to change everything. Then, once you have split your tasks, if you still want to move to Github Actions, it should be easier.

If you are curious, this is the project in which I use this travis configuration: shlinkio/shlink-web-client.


If you liked this article, feel free to share it: